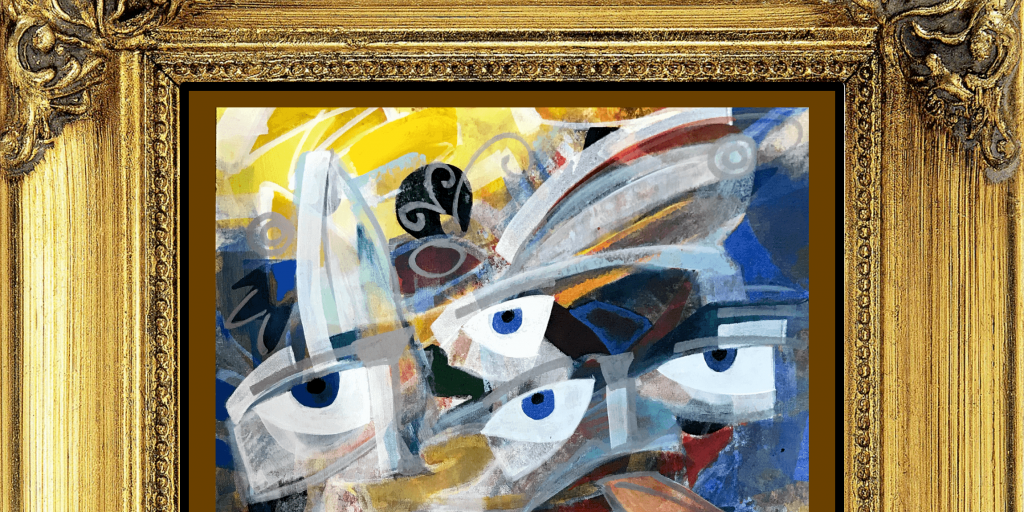 What am I working on? I have a picture called “I’m not sure that hystericat told the truth”. I was wondering what it would look like in a classical gold frame… As if it were a 140 years old. Unlikely, art-historically speaking, I know, but still…

Maybe a flat gold frame would look better. This looks a bit too classic, I think.

Also, I found two earlier photographs of this same work.

You can see from the older version above, that an awful lot has disappeared under the final painting. I sometimes wonder if that’s a good thing. And even this, the one you see in the picture above, was like a third version already. Is it good to work without a plan? As I was obviously doing here?

I was sort of waiting for something to happen, while in the meantime adding things to the painting. What I absolutely love about the whole process of painting is that eventually something always happens. And I do commend myself for being willing to change anything, without worrying that I will spoil it. In art that is…

Here is a later version, where the hystericat has started to appear. After this version, I doubled the eyes. To make the cat have two faces. Often when I see photographs of earlier versions, I wonder if they aren’t better than the final version. Stronger, clearer. But not in this case. The eventual hystericat is definitely stronger than the in-between one.