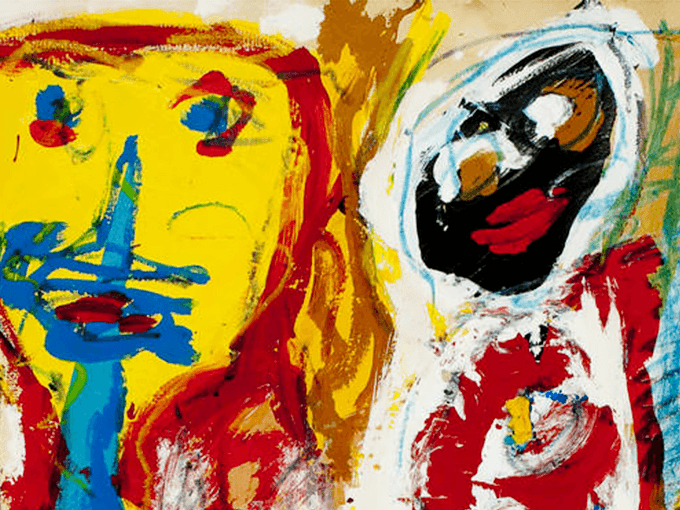 What am I working on? Still thinking about COBRA. Still looking at Karel Appel, the most famous member of COBRA. In Appel I see a strong link with folklore. Not straight folklore, but indirect, thematic, suggested folklore.

About Karel Appel
Studied during the second world war at the art academy in Amsterdam. During German occupation (1940–1944). Later said that he only went to the academy to escape being sent to Germany as a slave laborer.

Founded (1948, with Dutch painters Corneille and Constant) the Dutch Experimental Group and in the same year the artist movement COBRA (with some ‘primitive’ artists from Denmark).

In 1949, the Stedelijk Museum in Amsterdam had the first COBRA exhibition. It created a scandal. Made the mural ‘Asking Children’ for the canteen of the city hall in Amsterdam in the same year. For Apple this was a very civilized, ‘adapted’ work, not nearly as wild as his usual work. The indignation of the employees and the general public was so strong that the painting was covered and remained covered for ten years.

Had an international breakthrough in the mid-50s. In 1990 he had studios in New York, Connecticut, Monaco and Tuscany. Died 2006 in Zurich.

Eyes
Actually the mural, shown above, is a good illustration of what I want to point out. Here is another example:

Apart from great courage, composition and great intuitive color use, we see heads, eyes and mouths. In the case of the mural only eyes and bodies. But they are not realistic renderings. Apple is suggesting these elements, in a very primitive way.

Wired for attention
These elements are folkloric for a reason. I think through evolution we humans have become wired neurologically to recognize and be attentive to these elements immediately. Psychologists say we have big brains to calculate social relationships. So we are wired to recognize other humans. And one of our first orders of business is food, so we recognize plants and animals quickly too.

I did a little experiment with this. look at these two very similar drawings:

The only real difference between them is that the second one has a few black spots.

Now I turn the second one 90 degrees.

And the yellow circle becomes a face. The orange snake becomes hair. It doesn’t even matter that the mouth is just a single line. And it doesn’t matter that the eyes are very different. Just like in Appel’s painting ‘Hip Hip Hurray’, the mouths are strange. Three lines. Several lines. But because of their position, we see them as mouths.

One. People have an enormous tolerance to the execution of folkloric elements. There is an enormous leeway the artist has, and still people will recognize faces, animals, plants and so on.

Two. People like things they can recognize. I will get back to that in a later post.