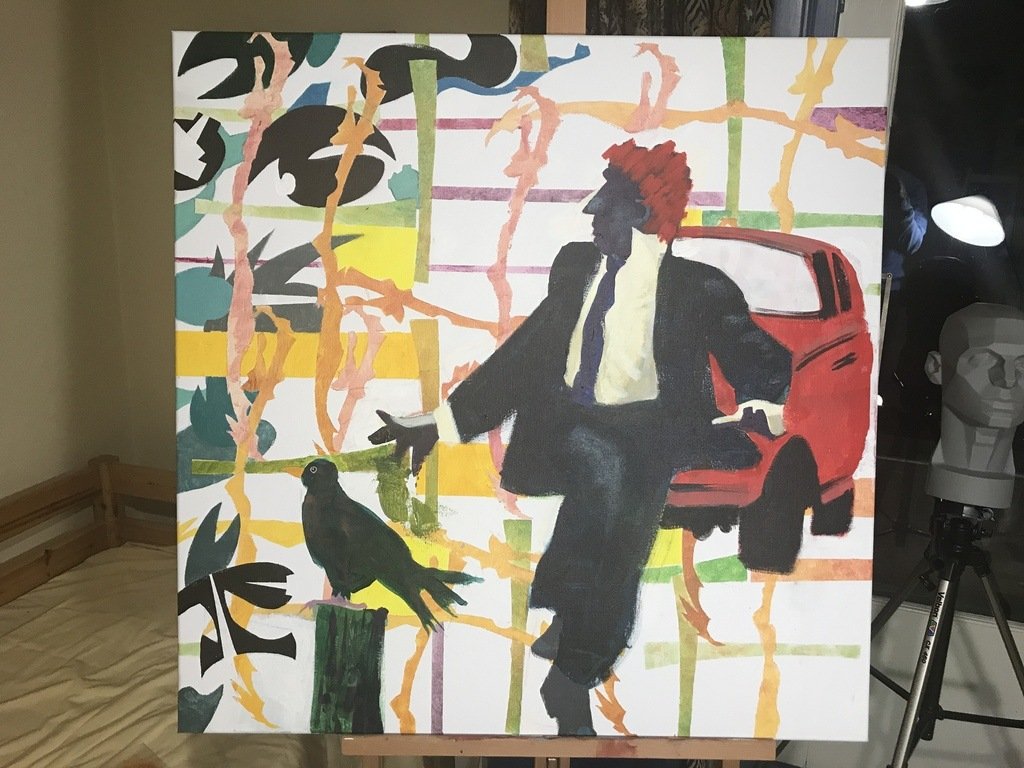 I have been posting a lot on the Dike Mysticism project. But that’s not the only thing I’ve been working on, art-wise. I’ve also made some progress with my Homehaus series, my XP20/20 group and I’ve started this new painting about fear.

I don’t precisely remember why I started this. I wanted to paint a man running away. Probably reflective of my own state of mind. Found an image on the web. Added some other elements like the bird and the abstract shapes. I am really attached to those abstract shapes. Ah, yes that was it, I had an impulse to do some more purely abstract works, but I thought they might not be expressive enough.

Anyway, here is the first phase. Or you could say, the second phase. The very first phase was the grid. Let’s see, I think I have a picture of that too. Normally, true to the Andy Morris system, I draw the grid with color pencil lines, but this time I decided to do the grid with stencils; make it an element of the picture.

Then I colored the focal points yellow. You know, the points in the composition based on the rule of thirds. As you can see in the top picture, the bird is in one of those focal points.

This is where I was the last time I showed this work:

Okay, this work wasn’t finished. Several people pointed that out. I couldn’t wait to pour paint on it, Andy Morris style. But this time I wanted to exclude the running figure, and perhaps the bird, from the pouring…

This is how it ended up

Okay, maybe I did a little bit more whiting out afterwards, but this picture is pretty close.

I found some more photos I took while working on this, I’ll add them here so you can see more of my process. Or if you’re not that interested in my process, at least I will have a record of it.

Here I taped off the running figure. I wanted to do an Andy Morris pouring, because that always makes things so much more interesting. But I didn’t want to disturb the main character too much. And now that I mention it, why did I want to have recognizable elements in this work anyway? Because I do think it’s easier being expressive with things that people – I myself for instance – can recognize. So I did not want to pour the poor running figure beyond recognition.

And here I had done both the pouring and the pressing… Ay! That didn’t look so good! No. Now I sure was glad that I had taped off the main character! As you can see from my process, some of my works stumble from one disaster to the next. Or maybe even all my works. Or maybe I should say: some phases of my work. My mind’s eye sees dark toned, 19th century, poverty stricken clochards, shivering on the sidewalk and drinking cheap alcohol from communal bottles. Don’t ask me why.

Here everything is drying, after I wiped off quite a bit of the pouring. So later I decided that I had lost too much structure and I started whiting out quite a few squares within the grid.

That was also the first time I bought some expensive acrylic paint. I got so tired of the white paint not covering the background, but I thought that was just how it was with acrylics. Then I saw a youtube movie explaining – and actually showing – that the more expensive white paints cover a lot better.

And then I decided that everything was getting too grey. I often find that after a while. And I added some more color. Those are the red ‘tongues’ coming in from the upper and lower left.

Oh, that’s right, I had taped off the bird too. Because the XP2020 theme was ‘Fear and Excitement’. The bird was the excitement (I thought you’d never guess), so I wanted to preserve the bird too. Now that I see this pouring phase again, and I look at the end result, I feel I actually cleaned this up quite nicely…. if I may say so.