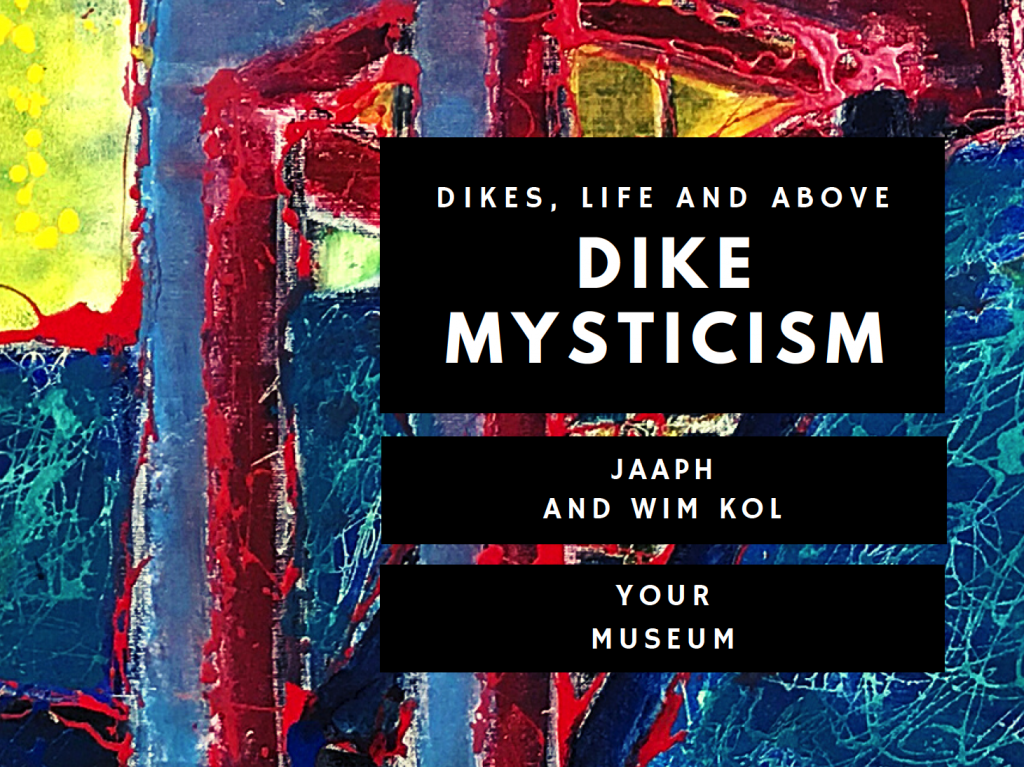 What am I working on? Mostly I’ve been busy with the ‘Dike Mysticism’ exposition. I just finished the catalog. The exposition has 12 works, many of which you – Mythical Reader – have seen passing by here in this blog.

I produced a catalog that describes the exposition, explains what Dike Mysticism is, and shows the works. As I was writing it, it occurred to me that both the works and the combination of works have many contradictions. Which is what makes the exhibition interesting, I think. The description of the exhibition in te catalog:

An Impossible Structure
Both the dike temple and life themes paintings are loaded with contradictions. The dike temple is an impossible, self-defeating architectural structure. It cuts through the dike in way that no sane architect would allow. The temple is devoted to the dike and at the same time it renders the dike useless.

Van Doesburg and Beckmann
The six dike temple paintings are quite different in their styles. There is one stark rendering reminiscent of Van Doesburg, with a primal and limited color palette. There is another one in a crypto-symbolic style. Yet they all depict the exact same monument from the exact same perspective.

Can a Car be a Home?
The life themes paintings too are self-contradictory. The home is depicted as a Mercedes car. The child is a snow wolf. Can a car is really be a home / Can an animal really be a child? Although, it’s not entirely impossible…. All life themes are labelled twice, always in two different languages. Like ‘BernChild’ combining the the Frisian word with the English word for child.

Stacked Contradictions
All these contradictions and inconsistencies are stacked upon each other and combined against each other. This makes Dike Mysticism an exposition that many visitors will remember and that could change their view on water, dikes and, who knows, even the basic themes of their lives. 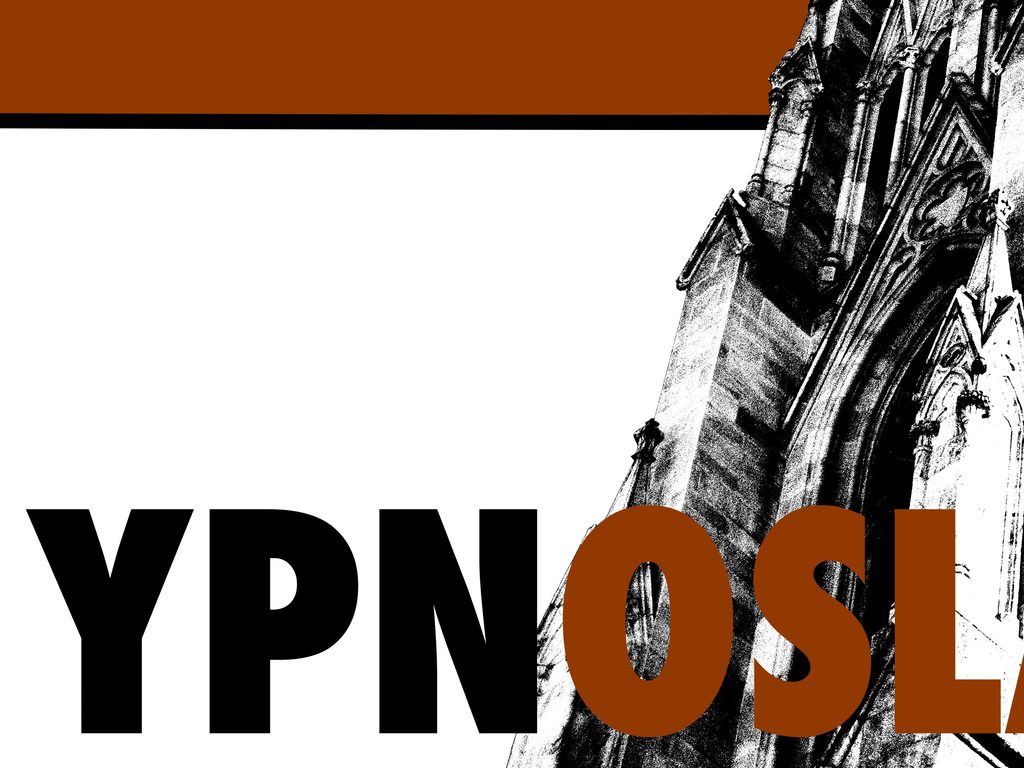 The last of the homehauses

I had finished the homehaus series, but then Dike Mystic Wim Kol came up with another depiction of his Dike Temple, this one inspired by Piranesi. Now there were 6 Dike Mystic paintings and only 5 homehaus works. 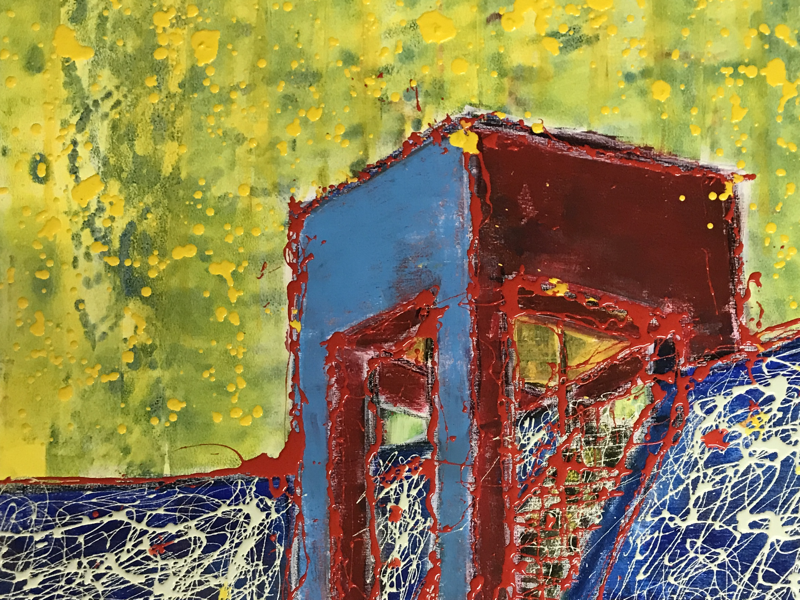 What am I working on? I was talking with agro-water-mystic Wim Kol about his work. What is it all about? We concluded that with his monumental water-archetypic buildings/sculptures, Wim’s wants to change people’s relationship with the dike. 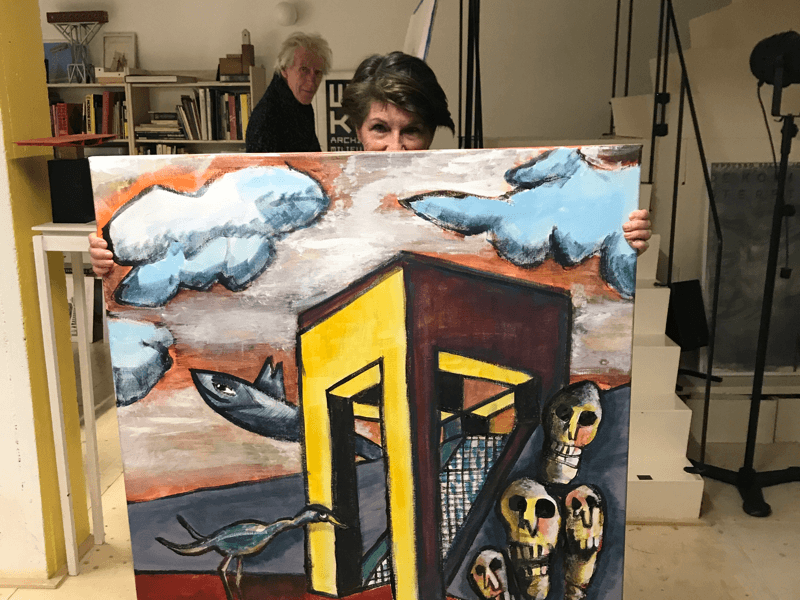 And the dike series goes on… Wim Kol and I have been working diligently on our ‘Dike Mysticism’ series. In this picture you see Wim’s wife Yvonne with the latest incarnation of the imaginary dike temple. 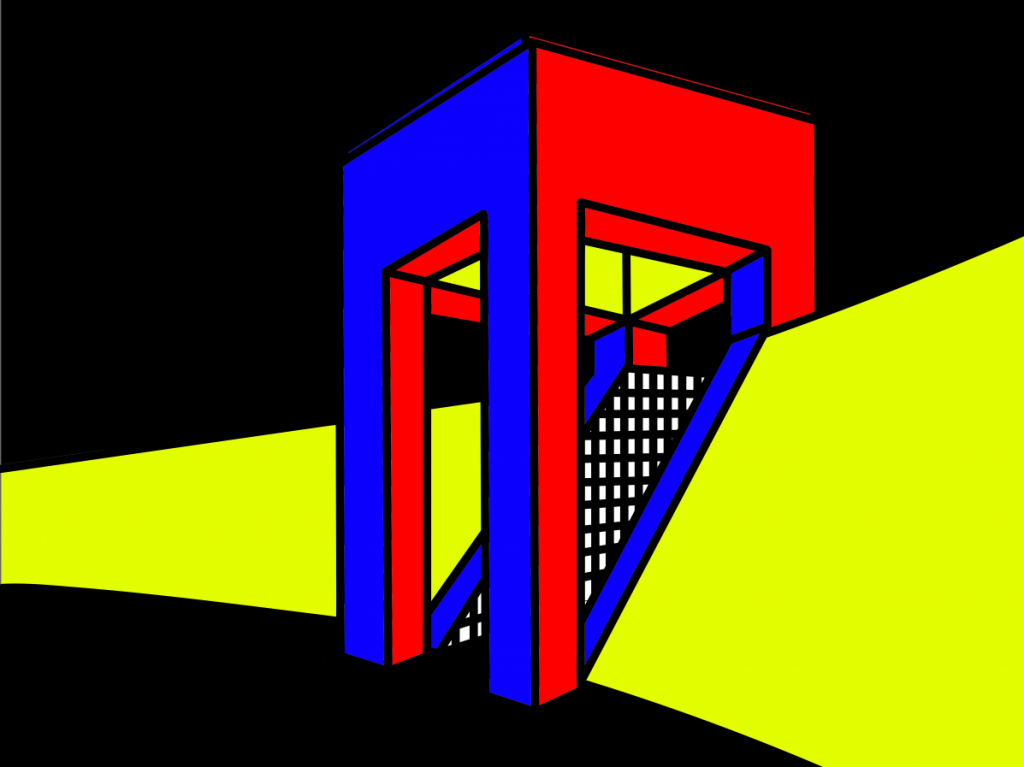 Primary colors, indeed
I think you will not be too surprised when I tell you that land-water-agro visionary Wim Kol and I were working on another Dike Temple painting this week. We wanted to do a van Doesburg style rendering this time. 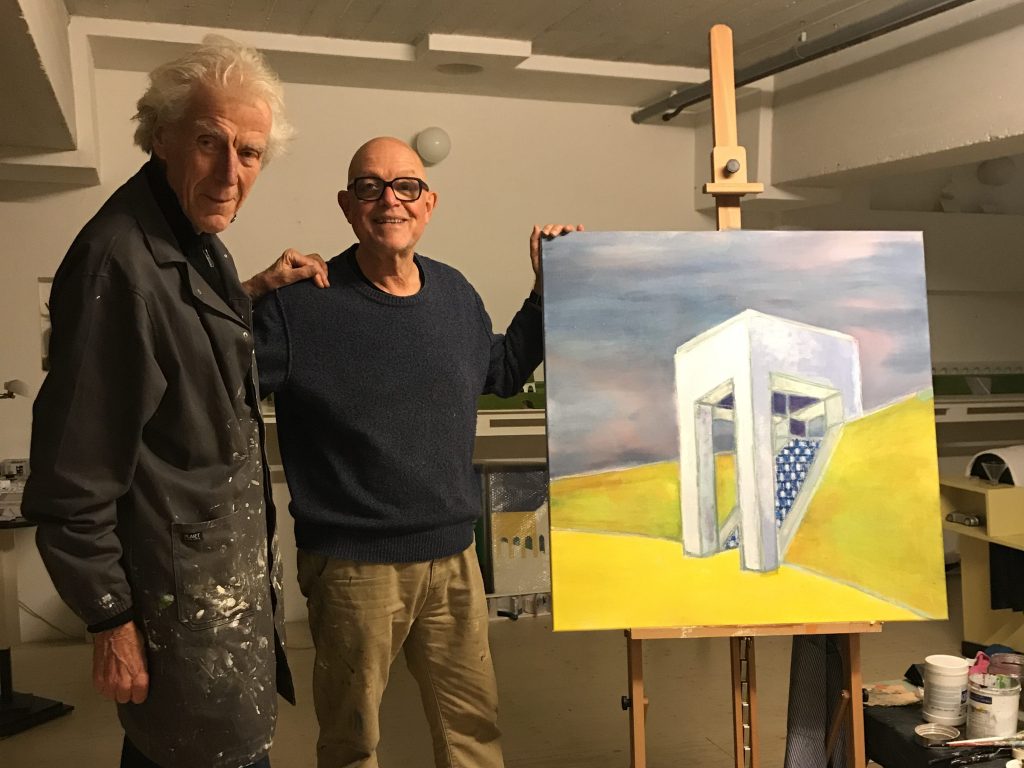 And the dike goes on…

Land-water-agro visionary Wim Kol and I finished our second Dike Mysticism work this week. Or maybe I should say: we declared it finished for now. It has come out quite different from number 1. In hindsight, we were surprised about that, and we were thinking about how it had happened.

What am I working on? Last week land-water-agro visionary Wim Kol and I finished our first Dike Mysticism work. As usual, we are still not quite sure we have finished the work. But we do suspect we may have. Thinking about the earth in this painting, should it be lighter in colour? 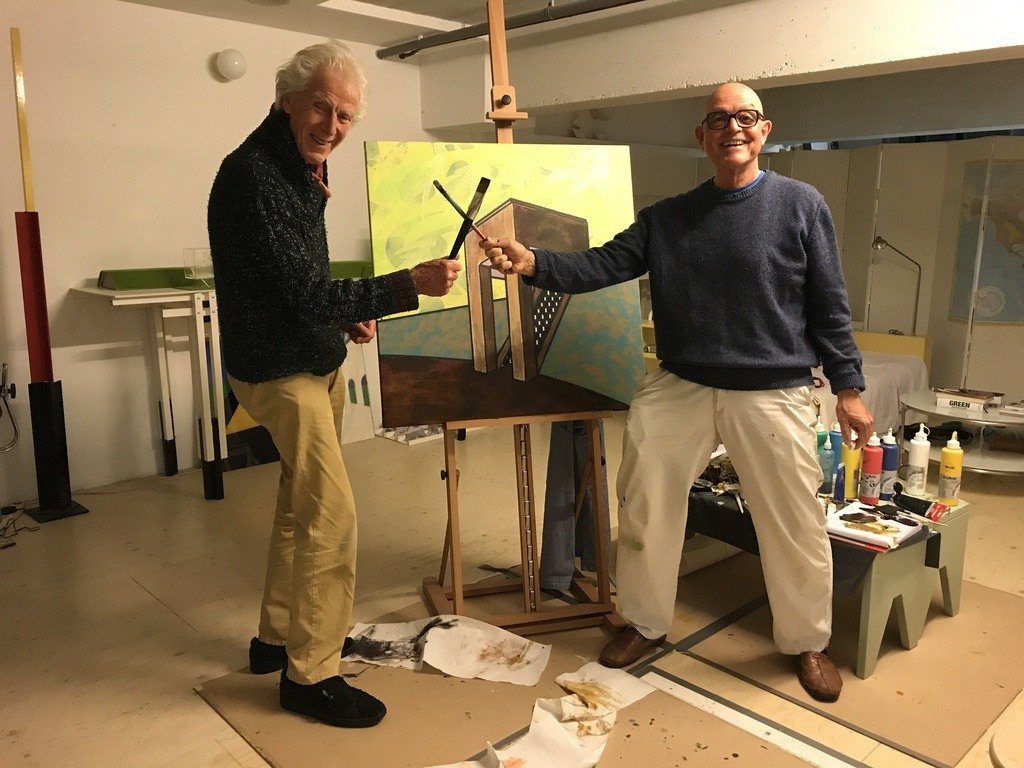 Tonight land-water-agro visionary Wim Kol and I struggled a bit with our Dike Mysticism work. Two weeks ago we had the black lines printed over our acrylics and the results were not quite what we had hoped for. 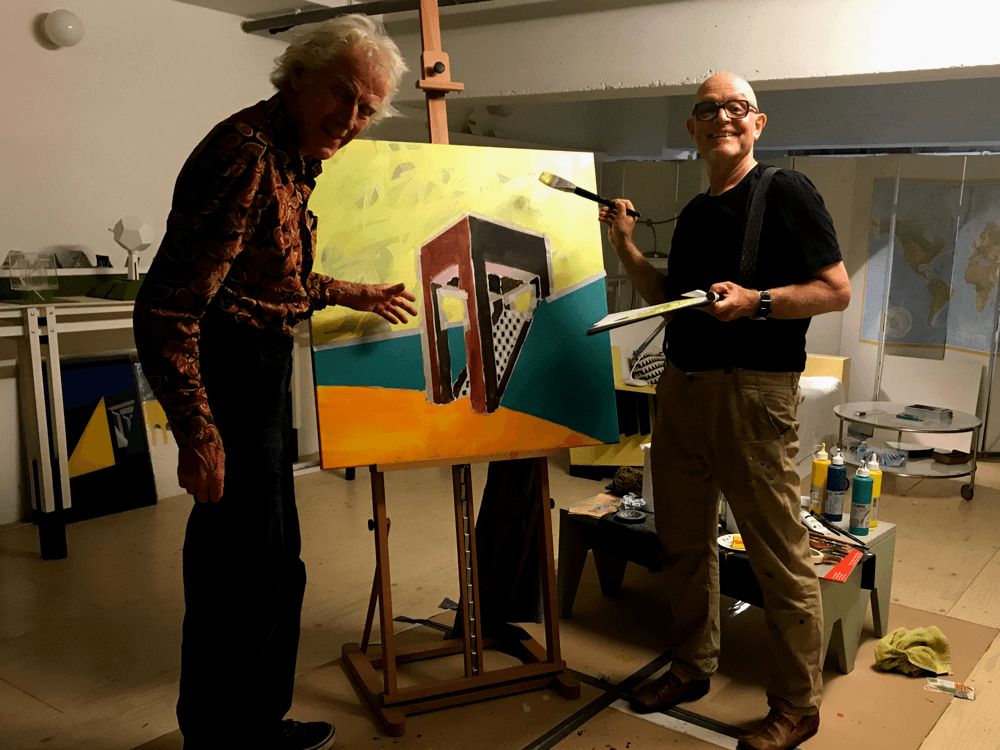 Dike Mysticism 5 – The sky is up

Tonight Dutch architect (and land-water-agro visionary) Wim Kol and I finished the second to last phase of the first phase of the Dike Mysticism project. In the post before this one, I described how we stressed the clouds in the the sky with white acrylic paint and a palette knife, after we discovered that sanding was not the answer. 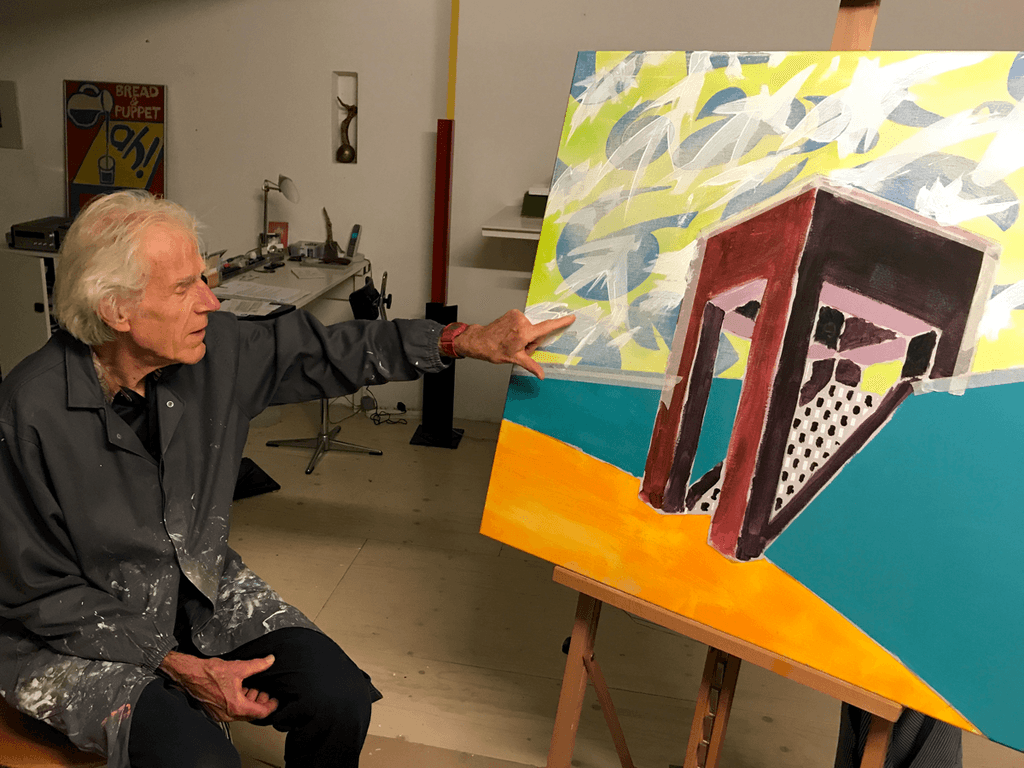 The story of the mystical dike continues. Today Wim Kol and I tried to distress the clouds, but it wasn’t as easy a we thought it would be…