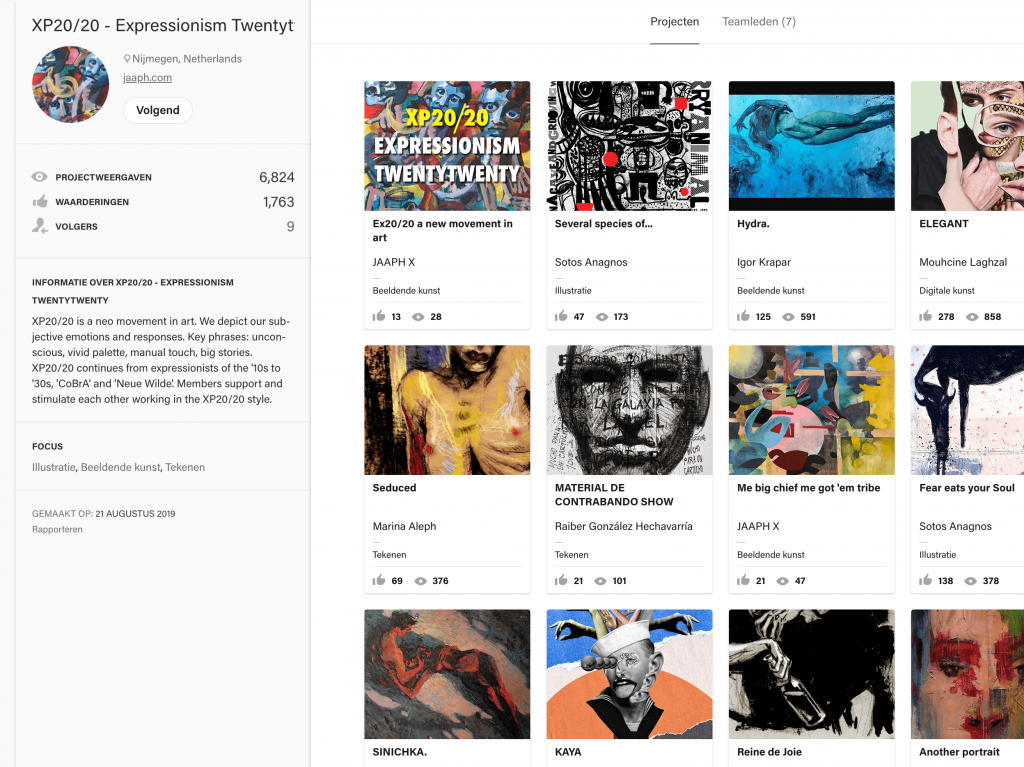 What have I been working on? Of course I have been working on my paintings, but I have also been building my own group of artists: The XP20/20 Behance Team. The basic assumption is that great art usually results from groups of artists. XP20/20 stands for ‘new expressionism’, a neo-neo-neo movement.

Expressionism
We depict not objective reality, but our subjective emotions and responses. XP20/20 continues from expressionists of the 1910s to the 1930s and movements like ‘CoBrA’ and the ‘Neue Wilde

Behance
Behance is a giant platform showing the work of thousands upon thousands of artists. In 2017, they were 10 years old, and they said they had no less than 10 million members. The number of really active members is probably much smaller, but still… Behance is skewed towards design (being supported by Adobe) but there is also a sizable number of painters on it.

The team
Behance is a new opportunity for world wide groups to support and stimulate each other. Earlier expressionist groups were linked to geographical areas. The ‘Blaue Reiter’ was in Munich. Abstract expressionists were in New York. CoBrA literally derived its name from cities: Copenhagen, Brussels, Amsterdam. Through the web we can now have a worldwide group. And we have. The XP20/20 group now has 7 members from all over the world. I am aiming for 8 members, so I am almost there.

As with many endeavors like this one, it was an uphill struggle at first. And when finally I had a team together, several members didn’t really have the time to do anything. But through a lot of rotations, I think we now have a good active core.

We’re mostly still forming the group now, but I hope we will be able to start most of these activities in September.